Bringing a new puppy into your home is a fun time for everyone.  After the initial brief adjustment period, your new puppy will become comfortable with his new home, his new family members, and his new routine.  Generally, prior to adoption for young pups (less than 3 months of age), puppies can do what they want, when they want, since they are kept with mom until weaning occurs.  Most breeders or fosters feed on a schedule, but the pups are able to eliminate when and where they want.  Once in your home, your puppy will need to be taught new sleeping and feeding routines, along with appropriate elimination times and locations.

Also see How to Train a Dog: Basic Training Techniques for your Puppy

Crate training helps facilitate teaching your new puppy appropriate behaviors.  Keep in mind that even if you use a crate initially, it does not commit you to using a crate for life.  Accepting a crate makes travel and staying in new places less stressful for everyone.  As such, most veterinarians recommend using a crate at first.

In order to house train a puppy, you need to think like a dog, and you really only need to know two facts.

That’s it!  You are ready to house train – expert level.  Below are some additional considerations for using these puppy facts during training.

Crate Size – Select a crate large enough for your puppy to eat, lay down, and turn around.  Do not select a crate that allows her to have an area far away from the food bowl to eliminate.  Adjustable crates allow for a smaller living space initially, with the option to increase the size as puppy grows.

Crate Purpose – Make the crate a living space where positive things happen, such as eating, resting and sleeping.  Never use the crate for punishment.  Put a comfortable bed in the crate for familiarity (watch for chewing).  Consider buying 2 beds so that you will have a spare if/when there is an accident.

Scheduling – Take puppy outside to eliminate first thing in the morning after he wakes up.  If he has soiled the crate, clean it immediately so that the crate remains a clean, safe place.  Feed him in his crate and remember to take him out after he eats.  After elimination, allow him to have monitored play time in the house.  If he does not eliminate, put him back in the crate and try taking him out later.  Most puppies will eliminate while playing if they don’t go outside.

Increasing Territory – Once your puppy has shown the ability to eliminate outside and not have accidents during playing, you can gradually increase her territory to include more of the house when she is unsupervised.  But remember, until she views the house as a larger version of her crate, she will continue to eliminate wherever she wants.

Reasonable Expectations – Young puppies cannot go more than a few hours without needing to eliminate.  Remember that you will need to get up during the night, and if you work away from home, you will need a helper to let your puppy out in the middle of working hours.

Setting your puppy up for success and praising him when he succeeds is the best approach to house training.  Have reasonable expectations, and don’t become too discouraged if and when there are setbacks.  If your puppy makes a mistake, clean it up and get her back on schedule.  If you use a crate to start your puppy out with the appropriate size living area, house training will be a breeze. 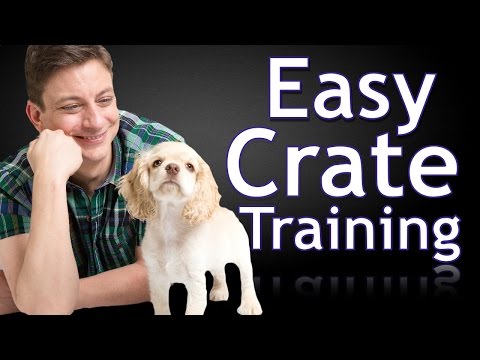